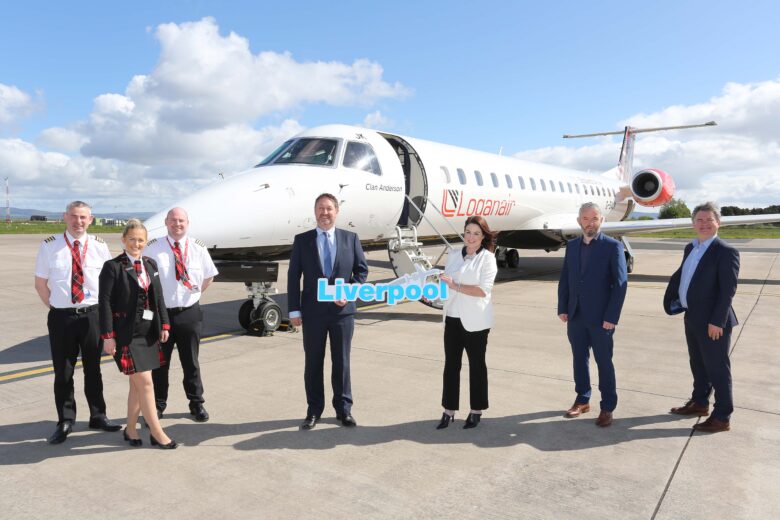 Press release
For immediate release
24 May 2021

There is a huge sense of optimism in the North West as the brand new Loganair service between City of Derry Airport (CODA) and Liverpool John Lennon Airport commenced today.

The Glasgow-based company – now the UK’s largest regional airline – recently stepped in to re-establish the popular UK domestic route following Ryanair’s decision to step back as the carrier.

Loganair is initially offering flights four days a week on Monday, Friday, Saturday and Sunday, increasing to a daily service from late June. Fares start at £44.99 one way with hand baggage and hold luggage allowance included as well as refreshments served on board.

The re-establishment of connectivity between the North West and Liverpool has been welcomed by local business leaders as a significant boost for the regional economy in Northern Ireland.

Paul Clancy, Chief Executive Londonderry Chamber of Commerce said: “Maintaining air links between our regional airport and the rest of the UK is crucial for our regional economy. Securing the route between City of Derry and Liverpool is welcome news for businesses and leisure travellers. We congratulate Loganair on their new venture and ongoing commitment to City of Derry Airport.”

Stephen Kelly, CEO Manufacturing NI said: “Connectivity is critical not just for leisure, study or visiting family and friends but particularly for business. Securing the route to Liverpool is really important as it maintains our connection to the North West of England and their large urban areas but also connects their population to the North West of Ireland and Derry in particular.  As we come out of Covid-19 restrictions and with the benefits of the NI Protocol for Northern Ireland, this is a chance for visitors, buyers and investors to see what a great opportunity Derry and the North West provides”.

Steve Frazer, Managing Director City of Derry Airport welcomed the first Loganair flight between CODA and Liverpool today as an important new development for the regional airport. He thanked Loganair for their commitment to regional connectivity from the North West and said that increasing the frequency of the new service to seven days a week from the end of June will offer maximum choice and flexibility to both business and leisure travellers.

He added: “We are very pleased that Loganair has re-established this important route for CODA which we are confident will play a key role in supporting our regional economy.”

Loganair’s Chief Executive Jonathan Hinkles joined in welcoming the launch of their new Liverpool route. He paid a special tribute to the “exemplary” locally-based team who had also maintained the London service without interruption during the challenging previous 14 months.

“It’s wonderful to celebrate their superb efforts today by re-doubling our commitment to City of Derry’s air links which we firmly believe augurs well for the future.”

Loganair was the first operator when CODA opened for business in April 1980.  The 49-seat Embraer 145 regional jet based at the local airport supports 15 direct jobs for pilots, cabin crew and engineers in the area.

Loganair operates return flights from CODA to Stansted twice a day, seven days a week. The Scottish airline will also be increasing flights to Glasgow daily from late June.