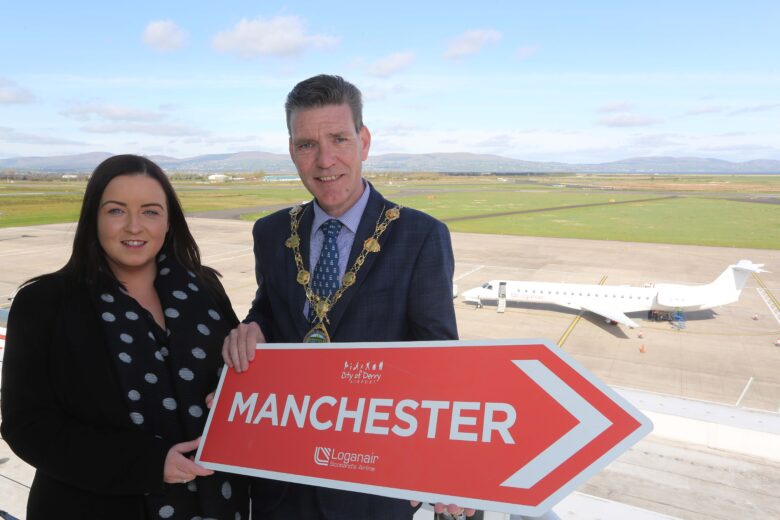 The countdown is on…with just one month to go until Loganair’s first inaugural flight to Manchester scheduled to depart on May, 24th 2019.  This is fantastic news for the North West as it provides direct connectivity to one of the main hubs in the North of England and creates opportunities for onward connectivity to international destinations via Manchester International Airport.

Charlene outlined that this new service to Manchester, on top of Loganair’s other routes to London Stansted and Glasgow International, is evidence of the airlines commitment to maintain frequent, conveniently scheduled air services from City of Derry Airport to cities in the UK.

Charlene stated that the new Manchester service has already proven very popular for both business and leisure travellers within our local catchment and is also helping to boost inbound tourism from the UK market.

The new service operated by Loganair will be available daily with fare prices starting from just £39.99pp each way.  Loganair’s all-inclusive fares include 20kg hold baggage and 6kg hand luggage and complimentary refreshments on board.

Loganair also offer discounts on child fares and frequent flyers can benefit from the Clan Loganair loyalty programme.  Flights from City of Derry Airport to Manchester are on sale now.

Mayor of Derry City and Strabane District Council, John Boyle, expressed his joy at the news: “I am delighted and excited that City of Derry Airport is extending its route portfolio through Loganair’s launch of its Manchester service at the end of May.

“The Manchester route can provide outbound and inbound passengers with enhanced connectivity for business and leisure travel while Manchester airport offers an array of worldwide options for onward journeys.

“The airport already has a strong and long-standing relationship with Loganair dating back to its inception in 1979 and I would encourage local people to visit the airline’s website to learn more about the airline’s flight times and fares to London, Glasgow and Manchester.”

Charlene Shongo concluded by stating: “City of Derry Airport is a vital piece of transport infrastructure and has become the airport of choice for the North West, offering both convenience and excellent customer service. I would encourage all travellers within the local catchment to think about flight options from their local airport when making future travel arrangements, asking air passengers to ‘Think Local and Choose CoDA’ whenever they can.  We have fantastic facilities on our doorstep, and it is essential that everyone takes advantage of their local airport for their travel plans when possible.”

For more information on Loganair’s NEW service from City of Derry Airport to Manchester, visit www.loganair.co.uk.